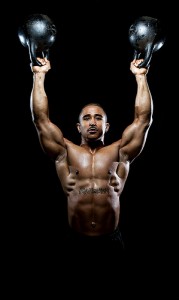 If you want to take your kettlebell training to another level, I’ve got a suggestion.

And, this method of training is backed up by scientific research by renowned spine biomechanist, Dr. Stuart McGill (who I was honored to interview in episode 35 of The RdellaTraining Podcast).

The method of training I’m referring to is “Bottom Up” (BU) training.

Just in case you aren’t familiar with that, I’ll explain what is is and the benefits.

Bottom up training is simply holding the kettlebell in an upside down (or inverted) position.

You might be wondering why would you consider performing anything while holding the kettlebell in an upside down position, but I’ll explain the key benefits in just a minute.

Honestly, I wondered the same thing, why would I consider including this in my training?

That was until I tried it.

Who wants to increase athleticism?

As Dr. McGill points out, increasing “core” strength increases strength everywhere else and this leads to increased athleticism.

And, ultimately that’s exactly what bottom up work helps us achieve, more athleticism.

There may be no better way to effectively strengthen our core than to perform some variation of kettlebell bottom up work.

And, to develop and accelerate unbelievable grip strength, it can’t be beat.

You see, holding the kettlebell in an upside down position FORCES us to stabilize our core musculature to prevent the kettlebell from flopping or changing position.

This is incredibly challenging and unbelievably effective.

Now, where do you start with bottom up (BU) training and what exactly do you do?

Good question, so here’s my progressions.

It starts in the rack position.

Make sure you know what a good “rack” position is, holding the kettlebell with the elbow tucked in against your body and in the starting point for a kettlebell press.

Start BU training by simply holding a lighter kettlebell in the rack position for time.  Shoot for around 30 seconds or so to get a feel for the bell in this position.

Keep the other hand close to the bell (but not touching) and in between the bell and your head, for safety reasons, of course.

Just rack and hold for now, that’s the first progression.

Once you have a good feel for the BU position, it’s time to go for a walk.

This is one of Dr. McGill’s most notable kettlebell exercises to increase core activation and firing.

You are simply doing a walk (like you would do a standard racked carry) while holding the kettlebell in the BU position.

Again, core stiffness is absolutely essential to prevent the loss of the kettlebell position.

Take a short walk for distance while holding the kettlebell in this position and when you’ve had enough, put the bell down, switch sides, and walk back to where you started from.

The next progression is the racked squat.

Assuming you are now comfortable holding the kettlebell in the BU position, a front racked squat here is simply a “moving” rack position as you slowly descend and ascend while holding the bell in this position.

I think it’s good to begin with a single, light kettlebell and then progress to two kettlebells, once you’re more comfortable.

Take it slow and steady, and shoot for 3-5 reps each side to begin.

A few reps and maybe a few sets of controlled movement while holding the kettlebell like this will be extremely challenging.

Presses are taking things up to the next level.

You are actually doing a clean and press, since you are cleaning the kettlebell up to the rack in the BU position.

I’ve seen some of my very strong colleagues press some really heavy weight in the BU position.

This is extremely hard, but again, we’re taking this in progressions and building unreal grip and core strength along the way.

Slow and control is the key and not many reps (1-5 range will do you just fine).

This is incredibly taxing on your entire body and like I said, I’m astounded by some feats of strength I’ve heard about with BU presses.

It’s important to remember why we’re doing this and to keep things in perspective.

We need to work within our own capabilities and keep things safe, so with that said, we start with light kettlebell and get a feel for this type of press.

The core activation and stability required is intense, without question.

Single kettlebell first, then the advanced progression is double bells.

Remember what I said about safety, so it’s critical to do this in an environment where you can dump the bells and bail safely, if you need to.

And, finally, the TURKISH GET UP.

Yes, the Turkish get up can be done in a BU position.

Because of the dynamic movement, mobility, and stability with the get up, that’s why this is the final progression.

The first thing is you need to have your get ups down rock solid.

Then, and only then, would you consider a BU get up (and after the other progressions).

And, just like all the other exercises listed here, you begin with a light kettlebell.

You get a feel for the movement with the bell in this position, before progressing to any significant load at all.

This one is advanced, but I thought I would mention it because it is an appropriate progression for BU work.

Is bottom up work right for you?

That all depends on your goals, skill level, and strength.

But, I will say that Dr. McGill refers to the bottoms up carry as a staple exercise for his athletes.

To increase core stiffness and strength which leads to more athleticism, the bottom up carry may very well be a great addition to our programming.

And, what are your thoughts or experience with bottom up kettlebell work?