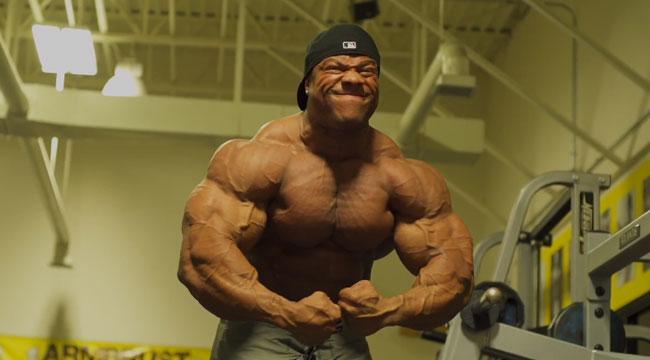 Everybody wants to build muscle and lose fat.  If that’s true, you could say we all want to be bodybuilders, at some level.

With that said, let me tell you about the movie, Generation Iron.

Generation Iron is amazing film.  A visual masterpiece with a powerful story about the sport of modern bodybuilding.

Narrated by Mickey Rourke and no matter how you feel about bodybuilding, the movie is insightful, inspiring, and humanizing.

Even if you don’t know anything about bodybuilding, you’ll be engaged, entertained, and ‘awed’ by today’s new breed bodybuilder.

What is today’s new breed?

Well, things have evolved quite a bit since the day’s of Arnold Schwartzenegger and Lou Ferrigno going head on in the previous bodybuilding classic, “Pumping Iron.”  Today’s new breed is entirely different from the bodybuilder of the 70’s. It’s a new generation.

Today, it’s about how much dense, ripped muscle mass can be packed on the human body.  Symmetry still matters, but these athletes are truly “big beyond belief.”

Generation Iron opened up with a really powerful, but usual scene. An enormous bodybuilder wearing a mask posing artistically in a subway. Spectators stopping and marveling at the striking, muscular bodybuilder who gracefully moved through his series of poses.  The vision of a hypertrophic physique was captivating.  After the posing session, the hooded bodybuilder ascended from the depths of the subway.

The bodybuilder was Kai Greene, the hungry, driven, hard working challenger for the Mr. Olympia title. The build up in the film was the 2012 Mr. Olympia, the top bodybuilding event in the world, known as the “Superbowl” of bodybuilding.

The next scene featured the current Mr. Olympia, the massive Phil Heath (pictured above), sitting on the top of a scenic mountainous region discussing his quest to stay on top of the bodybuilding world and defend his title.  Already, there were similarities between “Pumping Iron” and “Generation Iron” and what was shaping up to be an epic battle for the title of Mr. Olympia.

Is it talent or is it hard work? Which one wins?  That’s the debate between Phil and Kai, but what is common is the passion, the intensity, and the insanity, as these are the elements in the life of a championship bodybuilder. One thing they all clearly have in common is the psychology of winning and the championship mindset. They all exude extreme confidence and they must.

“There’s no such thing as the perfect body” explains Phil Heath. Instead, what it’s about is getting better. “Striving to be 1% better everyday.”  These are the important lessons we all can learn and apply in our own quests, whether it’s strength, health, performance, or body composition.

There were many other powerful stories and lessons that can be taken away from this film, as well.  For example, another battle is the one between Ben Pakulski and Branch Warren, two other top bodybuilders preparing for the Mr. Olympia.  They have 2 completely different training approaches and styles.

Branch, on the other hand, trains “hardcore” in the old, classic Metroflex gym in Texas with Johnnie Jackson. He’s battling through injuries, (recent and past) that had could have easily set him back.  He’s “doing everything he can to win” and he trains hard and heavy.

The battle here is between the scientific approach and the more traditional “old school” approach.  Again, it leads you to ask the question, which approach is better?

No matter what training approach or philosophy they have, they all share that “fierce drive to become a champion” as Lou Ferrigno put it.  Lou was in the film and so was Arnold.

Another powerful character story in the film was Victor Martinez and you had to feel for this fallen competitor.  A former bodybuilding champion who, at the time of the documentary, was just coming out from being incarcerated.  Victor had to spend some 6 months in prison and needed to come back to bodybuilding to reclaim his life. As Victor put it “My entire life is like the stock market. And, right now I’m in a recession.” Clearly, a good guy, who’s fallen to some hard luck in his life and one of the most humanizing athletes in the film.

The passion for bodybuilding is intense.  It’s consuming and there’s a deep drive unlike any other sport.  Bodybuilding is all consuming and it’s a 24 hour, 7 day a week sport because there is no rest from training, nutrition, the discipline, and the mindset.  You have to be consumed with the sport to be successful. And, you must have the desire and dedication to become a champion.

Generation Iron shows us this drive, passion, motivation, and commitment to become a champion in a very unique sport.

Generation Iron tell the powerful stories of these men striving to build and sculpt the human physique to it’s fullest potential and beyond. One thing about bodybuilding is that it’s not about performance. No one ever said it was. It’s about aesthetics and pushing to the brink of human anatomy and muscle physiology.

To the extent shown in the movie, he’s absolutely right.

This is a battle of champions leading up to the modern day competition.  A film I’d recommend to anyone and everyone to see and understand what the sport is all about and also learn lessons about what it means to become a champion, whether or not you’re a bodybuilder, athlete of any kind, or simply a passionate fitness enthusiast.

A brilliant and captivating film that will inspire and “awe” viewers.

There were many great quotes from the movie, but I’ll leave you with these 2 powerful lines.

“No one’s going to give you anything, you’re going to have to work for it.” -Kai Green

“I’m a bodybuilder until I die.” -Hidetada Yamagishi

The quote by Hidetada is why I wrote this, as it’s a part of my own background, my DNA.

The bottom line? This is an awesome movie.

But, you have to be open minded and think about what lessons you can learn from it.

While my own personal methods, techniques, and training principles are very different today than when I was a “bodybuilder”, there are things to be learned and the drive and desire to excel never dies.

Again, we are all “bodybuilders” at some level.

Scott Iardella writes about strength training methods to optimize health and performance. If you enjoyed this article, join a strong and growing community of passionate fitness enthusiasts and subscribe below to get a ton of cool, free stuff!

Subscribe below or go to RdellaTraining.com/join to get your FREE Report, Kettlebell Impact with 12 Powerful Kettlebell Workouts.