28 Aug How To Fix Your Squat: 5 Common Mistakes. 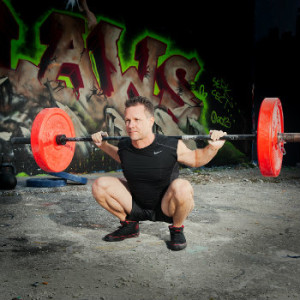 You already know that the squat is an extremely powerful lift in effective strength training.

But, would you be surprised to find out that you didn’t squat properly?

The squat is a fundamental human movement and also one of the absolute best ways to build brute full body strength.

Unfortunately, many people do not squat with proper biomechanical efficiency.

As much as I love kettlebells, the barbell is definitely my passion, as well.

After all, it was the barbell that got me started in the journey towards strength at a very young age.

Today, I’m still constantly working to improve and refine my own techniques.

I want to provide some easy fixes to some of the most common faults I’ve seen with barbell squat mechanics (but you can apply the principles to any squat pattern).

As you know, it’s critical to get this right for safety and effectiveness, just like all the other key exercises.

Remember, once a safe movement pattern is established, then you work to load the pattern and progress to big strength, as done with a barbell squat.

Keep in mind there are some variations to the squat, depending on bar placement (high bar or low bar).

Squatting is not that complicated, although it definitely seems that way sometimes.

Here are some common mistakes.

Allowing the knees to cave in.

This can be devastating and highly stressful to the knee joint many reasons.

First of all, it’s simply faulty mechanics to allow the knees to collapse in during a squat pattern.

The knees collapsing in at the bottom of a squat is a called a “valgus” stress.

This is an unsafe and highly stressful position and this is where injuries frequently occur to the knee joint.

Basically, this occurs due to lack of strength, lack of awareness, or poor motor control.

The Fix:  The fix is fairly simple, but will require practice to “program” in effective technique.

When you are in the squat position (assuming a normal stance with the feet spread approximately shoulder distance apart), you want to feel like you are gripping the floor with your feet, almost “spreading the floor” apart with your feet.

As you do this, “push your knees out” and maintain this during the entire squat pattern.

It may feel strange at first, but you’ll become used to the pattern and movement and it will actually feel more stable.

Again, think and practice “pushing your knees out.”

Failing to keep the shins in a vertical alignment.

The mistake is allowing the shins to move excessively forward (anteriorly) during the squat pattern.

In other words, the knees track too far forward over the feet.

This actually makes the squat less effective because the squat is a hip dominant (or hip initiated) movement.

Keeping the shins more vertically aligned, especially when initiating the squat, helps to drive the hips back (as if sitting on a box with box squats).

Of course, there will be some movement of the lower leg (tibia) moving forward during the descent and your knees will be slightly in front of your toes, but it’s important that this is not excessive.

The Fix: Imagine if your lower leg (below the knee) was fixed in cement, how would you squat back to sit on the box?

You would have no choice but to initiate the movement with the hips, while the shins would stay vertical as they were fixated.

Doing this simple visualization will help to keep the shins in a more vertical orientation and drive the hips backward.

Not effectively using the hips.

As just described above, the squat is initiated by driving the hips backward.

Once your in the bottom of the squat, it’s important to drive “out of the hole” with the hips, as well.

It’s the powerful hip extensors (glutes, hams, adductors) that drive the bar up out of the bottom of the squat (the hole).

The Fix: Always think about powering the hips back, as well as up out of the bottom position of the squat.

As with many of the most important exercises that we perform with a kettlebell or barbell, it’s all about hip power, so maximize your hip strength to drive the bar up out of the hole.

Not settting the spine in proper alignment.

Setting the spine is essential for safety in the squat.

We want our spine to be set in a neutral (natural lumbar curve) or slightly extended position at all points during the squat.

What we will want to avoid is a flexed or forward position at any time point, as this is dangerous position, especially for the lumber spine under a heavy load.

Set the spine by getting tight in the abdominals (I’ll cover this below in breathing) and maintaining the position during the entire squat.

A simple cue to remember when driving up from the bottom is to “lift the chest” to maintain a tall spine and prevent forward flexion.

Whether neutral spine or slight extension, we want to remember to PREVENT forward lean (forward flexion or rounding of the spine) as this will increase risk for injury.

The Fix:  Stay tall and keep tight throughout the squat.

Keep the spine set in an optimal position (neutral) and avoid a flexed or rounded posture at any point.

When you get set with a squat and step back from the rack, just before descent, take a big breath and hold it.

Taking a deep breath and holding it is essentially setting a “rigid corset” around your spine for maximal stabilization.

This is a very powerful technique for safety and effectiveness which is known as the Valsalva maneuver and increases the intra-abominal pressure to effectively stabilize the trunk.

This is not only safe to do, but effective.

Failing to get set with a deep breath for stabilization during the barbell squat can significantly limit squat strength and performance.

The Fix: Take deep breath before you squat and hold it.

You exhale at the top of the squat or exhale as your coming up to assist in driving the bar upward, I’ve seen it done both ways with effectiveness.

These are 5 simple things you can use as a mental checklist for proper squat mechanics.

Just to summarize the 5 points:

There’s definitely more considerations with the barbell back squat, but this serves as a simple, concise template for common faults and fixes.

The squat is the key to strength, conditioning, and powerful movement, but it’s essential to be safe and lift with efficiency.

And, to get more great tips, updates, and free training, enter your email in above right now and I’ll see you on the inside.