09 Mar Understanding the Path of the Kettlebell (Swing, Clean, and Snatch) 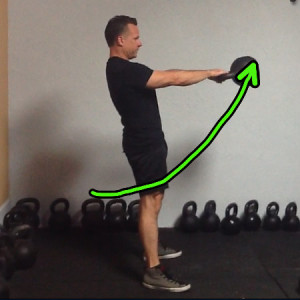 Understanding the path of the kettlebell during the swing, clean, and snatch will help to optimize your performance with kettlebell training.

The path of the kettlebell is different for the swing, clean, and snatch.

Notice the difference in each of the images in this article and I’ll explain this concept, keeping it very simple with the visual demonstration.

Let’s start with the kettlebell swing, where it all starts.

The Russsian style (or Hardstyle) kettlebell swing is about projecting the kettlebell horizontally.

While the kettlebell is hiked back between your legs, the hip hinge pattern with a forward hip drive propels the bell forward up to approximately shoulder level, forming a straight line from the shoulder joint to the end of the kettlebell.

Think of the bell as being as extension of the arms at the top of the swing, with a momentary pause at the top.

The path is projected horizontally and away from the body.

You can see the path in the image.

Again, the explosive hip drive is the key.

Next, we’ll look at the kettlebell snatch.

The difference in the snatch path is that the kettlebell is projected more vertically, as opposed to horizontally.

Obviously, this is the case, as the kettlebell is propelled up overhead and finishes with the arm fully extended in a locked out position.

You should note that the path of the kettlebell with the snatch is closer to the body, as compared to the swing.

The kettlebell is hiked back between the legs and then with the same explosive hip drive as the swing, the bell is projected and pulled vertically into the lockout position overhead, in one smooth, efficient movement pattern.

There shouldn’t be any “banging” on the forearm either, but we’re just talking about the path here.

Finally, we look at the kettlebell clean. 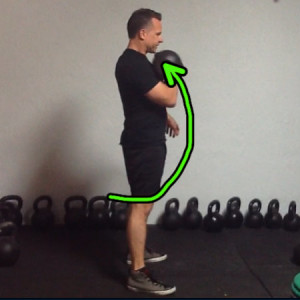 In the clean, the kettlebell path should follow a pull that is the closest to the body.

Again, there is the same hip hinge, the hiking back of the kettlebell, and the explosive hip drive that are present in swing.

The upper arm remains fixed to the side of the body during the forward hip movement (hip extension) as the pull is vertical and close.

You are pulling the kettlebell up your body.

When the kettlebell is projected too far away from the body in the clean, this is typically when the bell tends to “flop and bang” on the outside of the forearm – this is critical to understand.

When the kettlebell is projected too far away from the body in the clean, this is typically when the bell tends to “flop and bang” on the outside of the forearm.

As you can see, the path of the kettlebell is very different for the swing, snatch, and clean.

SUMMARY OF THE 3 PATHS

Let me summarize this for you with these 3 main points. 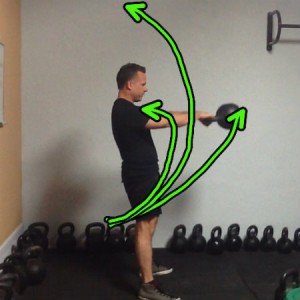 1-In the swing, the kettlebell is projected horizontally and goes the furthest out from the body.

3-In the clean, the kettlebell travels very close to the body as the bell is pulled more vertically up the body.

Understanding these differences in the 3 paths will help in executing proper mechanics and performing the exercises with improved safety and efficiency.

Hope this helps. If you got value, please share with others.

Scott Iardella, MPT, CSCS writes about strength training methods to optimize health and performance. If you enjoyed this, join a strong community of passionate fitness enthusiasts and subscribe below to get free stuff that will help you out! Or subscribe at RdellaTraining.com/join.
Tweet
Share143
Pin12
155 Shares