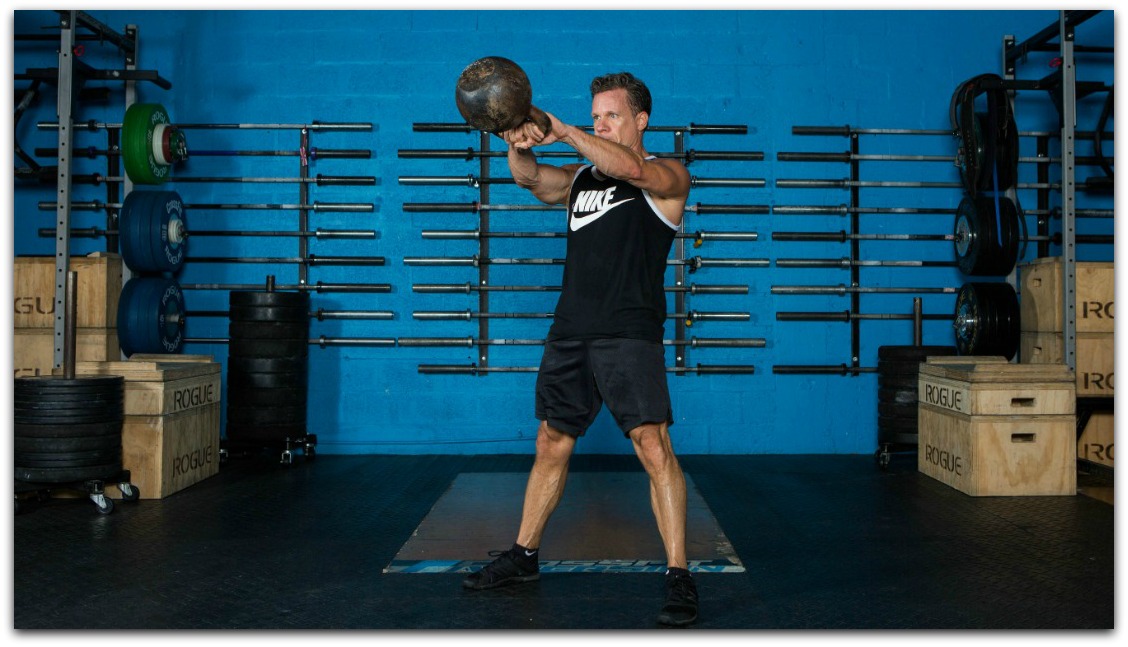 Here’s a training topic that no one else talks about.

In this article, you’ll learn about the single biggest difference between kettlebell training and Olympic weightlifting. While there are many differences between these 2 explosive training methods, there is one thing that makes each of these strength skills so unique.

Make no mistake, these 2 training methods are very different from each other, yet also complementary.

There’s one thing that is central to both and no one seems to talk about this.

When I started to learn the Olympic lifts (the snatch and clean and jerk) – after establishing a strong foundation with hardstyle kettlebell training – I thought that my kettlebell skills would somewhat easily transfer to the barbell.

I thought that lots of technically sound swings, snatches, cleans, and other kettlebell exercises would set a good baseline that would transfer to the Olympic lifting.

There’s a key difference between kettlebells and Olympic weightlifting that requires new motor learning and skill development to excel in either.

It comes down to hip power.

Yes, there are many technical differences between training with a kettlebell and a barbell, but the biggest difference comes down to one important distinction.

THE HIP HINGE VS THE POWER POSITION

The hip hinge pattern is used with kettlebell training and the power position is used with Olympic weightlifting. I’ll fully explain them here.

I’ve been immersed in Olympic weightlifting for the last few years now and I love the strength skill and sport for many reasons. The truth, however, is that it started out as a disastrous experience for me.

I went to my first workshop as a total ‘newbie’ and my performance was really bad, almost embarrassing. I thought that the solid technique with kettlebells that I had worked so hard for through the years would make the transition easier.

Boy, was I wrong! My transition was very eye-opening, to say the least.

What I learned is that the hip power with each method is vastly different for optimal performance.

Are the hip hinge and power position the same thing?

No, they are not. I’ll explain why.

Let’s take a close look at each movement relative to the training modality. 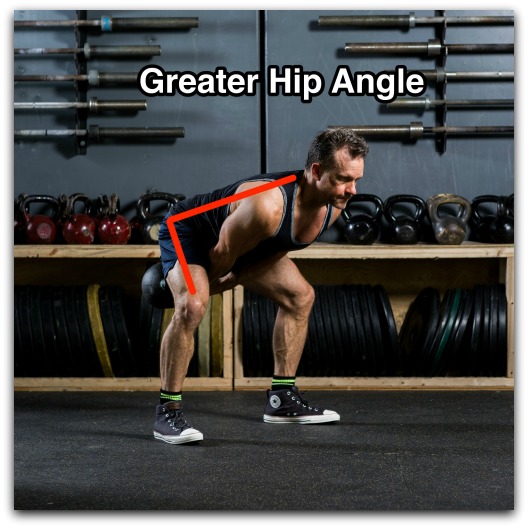 The hip hinge is the essential part of the kettlebell swing and other kettlebell ballistic exercises. It’s the hip hinge that makes kettlebell training effective, safe and explosive.

The hip hinge is what it sounds like – a hinging motion at the hips where the spine is maintained in a neutral position. The hips fold or “hinge.” There is typically a significant amount hip folding (hip flexion) but there is a minimal amount of knee bending (knee flexion). In other words, the knees are relatively straight or slightly bent.

A HIP HINGE = A HINGING MOTION AT THE HIPS WHERE THE SPINE IS MAINTAINED IN A NEUTRAL POSITION.

The hips control the movement as the spine must be maintained in a neutral (safe) position.

The hip hinge typically allows for a great degree of hip flexion.

An advantage of using a kettlebell is manipulating the smaller kettlebell between the legs during hip hinge which allows for more range of motion and subsequently more explosive hip drive.

This is in contrast to the barbell where you cannot swing a barbell through your legs to explosively drive the bar vertical – obviously.

The bar must remain anteriorly (or in front of) the hips and thighs during a ballistic movement (clean or snatch). We’ll talk about that when we talk about the power position.

The hip hinge is the first critical step in learning how to swing a kettlebell effectively and is the basis for the other explosive movements (kettlebell clean, snatch, and double kettlebell work).

To get 12 of my best kettlebell workouts, grab the FREE Kettlebell Impact Report – you can get it here.

To be successful with kettlebells, you must be able to demonstrate a solid hip hinge.

Please note that the hip hinge is not only useful in kettlebell training. The hip hinge is useful for optimizing human function, athletic performance, and keeping us out of pain.

The hip hinge is useful for optimizing human function, athletic performance, and keeping us out of pain.Click To Tweet 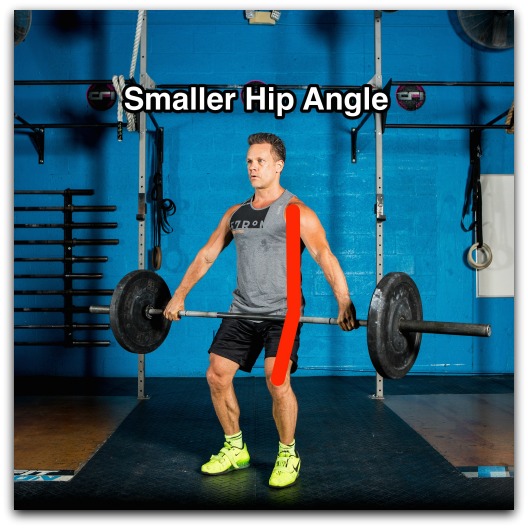 The power position is to Olympic weightlifting what the hip hinge is to kettlebell training.

According to highly-respected weightlifting coach and athlete, Danny Camargo of Oly Concepts, the power position is arguably the most important component of the snatch and clean and jerk.

The power position has been referred to the “scoop” during the snatch or clean and is a critical component to explosively lifting a heavy barbell to the shoulders – or overhead.

What is the power position?

The power position is positioning the bar close to the body (at the hips) to allow you to be in the best possible position to explosively propel the bar vertically (just before the 2nd pull).

The 2nd pull is considered by many to be the most important part of the lift because it requires the most power and explosiveness with the barbell. And, the power position is crucial for this 2nd pull.

As a quick review, the 3 pulls in Olympic weightlifting are:

Here are the key differences between the power position and the hip hinge:

The power position happens in a microsecond, but it’s extremely important for the athlete to demonstrate triple joint extension (hip, knee, and ankle extension) in order to get the bar vertically with the clean or the snatch.

In comparison to the hip hinge, the power position hip angle is significantly smaller (at approximately 10-20° – SEE ABOVE).

As I just mentioned, it happens in an instant and can be hard hard to spot, especially when performed by an elite athlete.

The hip hinge, on the other hand, is much more deliberant and noticeable as the range of motion is much greater.

Remember that the idea with Olympic weightlifting is to keep the bar in a vertical bar path as much as possible.

The bar is projected from the floor to either shoulder height or overhead in a quick explosive movement and the bar must maintain in vertical bar path for optimal lift efficiency.

Even though a kettlebell snatch projects vertically, the kettlebell has the different biomechanical advantage of using the hip hinge (to hike the kettlebell backward between the legs).

Olympic lifting is always about going vertical, while kettlebell training is not. Because of this, the hip power is different.

WHAT YOU NEED TO KNOW

The simple takeaway is this, the hip hinge is not the name as the power position.

THE HIP HINGE AND POWER POSITION ARE NOT THE SAME.

The kettlebell hip hinge and the power position are 2 distinct movements – in regards to the hip power.

This makes kettlebell training and Olympic weightlifting very different entities. However, they are also complimentary because both require hip explosiveness and power – which is important for the athlete and everyone else.

The truth is that the power position in Olympic lifting is much harder because it’s a smaller and insanely fast movement with the more technically challenging Olympic lifts.

And, an effective hip hinge pattern does not always translate into an effective power position, which may be surprising because of the effectiveness of the hip hinge in producing strong, forceful hip power.

Understanding the differences here will help you to understand the differences between kettlebell training and Olympic weightlifting – for learning, teaching, or developing your skills as an athlete or coach.

Both are incredible methods to develop the important qualities of strength, as well as improve human movement and potential.

But, kettlebell training is not “mini-weightlifting” nor will kettlebells make you an exceptional weightlifter.

Each method is complementary, but they are exclusive and independent.

While these training methods can definitely help each other, these are different skill sets and the hip power difference is one major distinction between kettlebell training and Olympic weightlifting.

Scott Iardella, MPT, CSCS is a strength coach, athlete, and former “physio” who’s mission is to bridge the gaps in strength, performance and injury prevention. Learn how to train at a high level of strength and performance while minimizing (or negating) risk for injury to achieve an unsurpassed level of results. You’ll find free training resources and giveaways at RdellaTraining.com/join.
Tweet
Share30
Pin
30 Shares