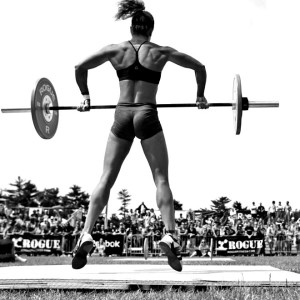 Well, there’s a new published study that has some really interesting findings about the widely popular and growing CrossFit style of training.

I definitely get excited about new research.

Why? Because each study offers valuable information that we can learn from.

I’ll tell you the good, the bad, and what you need to take into consideration about this new study.

The new study is titled CrossFit Based High Intensity Power Training Improves Maximal Aerobic Fitness and Body Composition in the November, 2013 issue of The Journal of Strength and Conditioning.

The goal of the study was to find out whether CrossFit style training (or HIPT, known as high intensity power training) would improve aerobic capacity and body composition.

Here are some of the defined characteristics of HIPT (high intensity power training):

Let’s take a closer look at the data that was presented.

The study investigated 10 weeks of CrossFit training and the effects on aerobic capacity (V02Max) and body composition in healthy adults.

Participants were of all backgrounds and levels and were trained at a CrossFit facility.

A big question about any study is how many participants were enrolled in the study?

The larger sample size, the stronger the data.

There were 54 original participants in this study, with 43 completing the program and returning for follow up testing.

The data for this study is based on 43 subjects, which is about average for a study like this.

It’s not overwhelming and it’s not ridiculously small either (but a larger sample size would certainly help).

Another important point about the participants is that they all had already been following a “Paleo” diet that was maintained through the entire 10 week training program.

This is important to consider because body composition changes have been previously reported with “Paleo” based nutrition programs.

(*Note: The complete 10 week WOD programs were contained in the published study in the JSCR.)

So, what did the study show?

The study found that after 10 weeks of training, HIPT significantly improved maximal aerobic capacity and body composition in individuals of all fitness levels and genders.

There was an observable reduction in body fat across all groups in the study, but as previously mentioned, it is impossible to conclude that the body fat reduction was entirely due to the HIPT program since all participants were implementing a “Paleo” based diet.

What could be concluded is that HIPT and “Paleo” is a successful combination to promote positive body composition changes in the broad population.

Aerobic capacity (as measured by Vo2 Max) was also notably improved in all groups.

Aerobic benefits were achieved with the methods of HIPT, regardless of fitness level or gender.

What was interesting about the aerobic capacity improvement is that previous studies (in high intensity interval training) have not shown a benefit for improving Vo2 Max in “well-trained” subjects.

However, there was an improvement in aerobic capacity in “well trained” subjects in this study (although I’m not sure how many subjects this actually represents).

This is interesting because it’s says that “previously trained” athletes may improve aerobic capacity with HIPT (*this will require additional research).

Now, what about injuries?

This is a legitimate concern with HIPT.

Remember from earlier that 16% of the participants did not complete the training due to reported overuse or injury.

16% is a significant drop out rate (again 9 out of 54 subjects withdrew from the study, specifically as a result of reported injury).

This is despite the supervision of a fellow of the American College of Sports Medicine (ACSM) and an ACSM certified registered exercise physiologist (*it should be noted that there are still questions around the specific training background and scope of practice with the supervision here).

This injury rate is only the rate that is reported in this published study, but there are certainly many other injury reports in the “real world” population as a result of HIPT.

I’ve heard this myself and I’m sure you probably have, as well.

For HIPT to improve, this kind of injury rate will need to be reduced.

HIPT is an “extreme” training regime, there’s no question about it.

And, anytime you’re doing the things mentioned above (i.e. doing exercises “as fast as possible”), technique will be sacrificed.

When technique is sacrificed, there WILL be an increased risk for injury.

Should you question the risk-to-reward with this type of training?

Question everything, not only with HIPT, but with all forms of training.

Since the “above average” and “well above average” participants had relatively small improvements in body composition and aerobic fitness, this population may find the risk of lost training time due to injury isn’t worth the incremental improvements.

My own training philosophy doesn’t align with the HIPT training characteristics listed above, however, each of us owes it to ourselves to fully understand the nature of the training methods we choose.

We all have the ability to choose the path we take to get us to our goals.

But, we damn well need to understand the risks and rewards of our choices and have a rock-solid rationale in place for the actions we take.

There, I said it.

Getting back to the study, it’s good data to build on, but like any other study, it’s just a starting point and a small piece of the puzzle.

CrossFit is growing and it’s probably here to stay, but people need to better understand what it is and what it can do (the pros and cons).

Honestly, I was excited to see this article, take a deeper look, and share the revealing facts.

In summary, I believe it’s these 5 key points.

CrossFit has a strong following, no question.

And, like many things in life, there’s always pros and cons.

In full disclosure, I am not a “CrossFitter” as you may have guessed by the previous mention about my training philosophy.

But, I’m not here to bash any training system just because I’m not in agreement with the training methodology and philosophy.

I’m just passionate about science and I enjoy looking at studies with an open mind from an objective standpoint.

The data is the data.

It’s your choice what system you follow, but you should know the facts and truly understand the methods.

Due your due diligence is the key take away here.

The facts and methods are presented, so the choice is yours to make.

What is my training philosophy?

Scott Iardella writes about strength training methods to optimize health and performance. If you enjoyed this article, join a strong and growing community of passionate fitness enthusiasts and subscribe below to get a ton of cool, free stuff!
Subscribe below now or go to RdellaTraining.com/join to get your FREE Report, Kettlebell Impact with 12 Powerful Kettlebell Workouts.
Tweet
Share111
Pin5
116 Shares