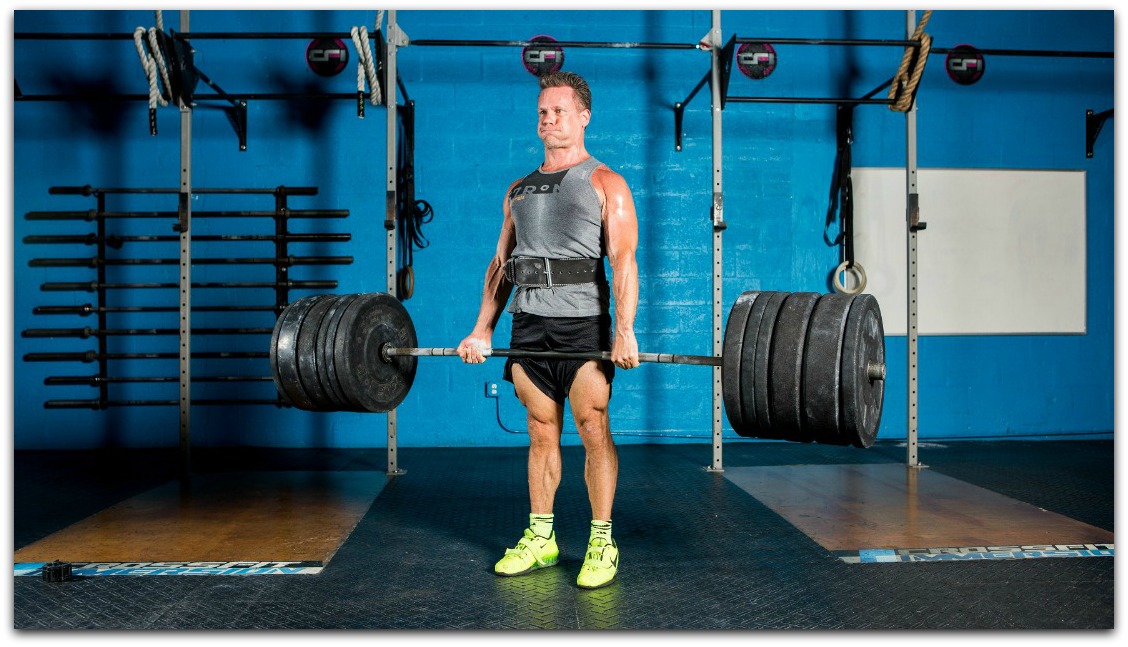 26 May Straight Bar Vs. Hex Bar Deadlifts – Is One Better Than The Other?

There’s a brand new study comparing muscle activation and power with the straight bar versus the hex bar deadlift.

Is one style or variation better than the other?

This study definitely sheds some light on that question.

And it’s also a really interesting and exciting study, so let’s take a look.

The new study comes from the May 2016 issue of the Journal of Strength and Conditioning Research.

The title of the study is An Examination of Muscle Activation and Power Characteristics While Performing The Deadlift Exercise With Straight and Hexagonal Barbells.

We know that in comparison to other strength exercises – such as the squat – the deadlift has comparatively received little research.

In addition to the standard conventional straight bar deadlift, the hexagonal barbell deadlifts has received significant attention and is a popular variation.

But, only one study to date looked at the comparison between the two different styles of barbell deadlift.

This new study was to further investigate the two styles of deadlifts looking at muscular activation, as well as power characteristics.


HOW THIS STUDY WAS DONE

Qualifications for the study were that the participants performed three days a week of resistance training, including deadlifting at least once per week for the past year.

Participants were disqualified from the study if they were not capable of lifting 1.5 times their body weight with either bar.

The testing procedure included warm-up sets and then they were tested to determine their one rep max (1 RM).

The order of the bars (straight bar or hex bar) was randomized for the one rep max testing procedure for the subjects. All subjects completed both conventional style straight bar deadlifts and hexagonal bar deadlifts.

Participant completed three testing sessions in which the first two sessions were the one rep max testing and the third testing session was performed with sub-max loads (65 and 85% of the 1 RM) with each barbell performing three repetitions to determine force measures.

Data was collected, electromyography was used to analyze muscle activation, and force and velocity measures were assessed for both styles.

1.) There was no significant difference in the 1 RM values between the straight bar and hex bar deadlifts.

2.) EMG studies demonstrated increased amplitude for the vastus lateralis with the hex bar compared to the straight bar.

4.) Peak ground reaction force, peak power, and peak velocity were all greater with the hex bar compared to the straight bar.

The data can be visualized below for the muscle activation differences between the 2 variations. 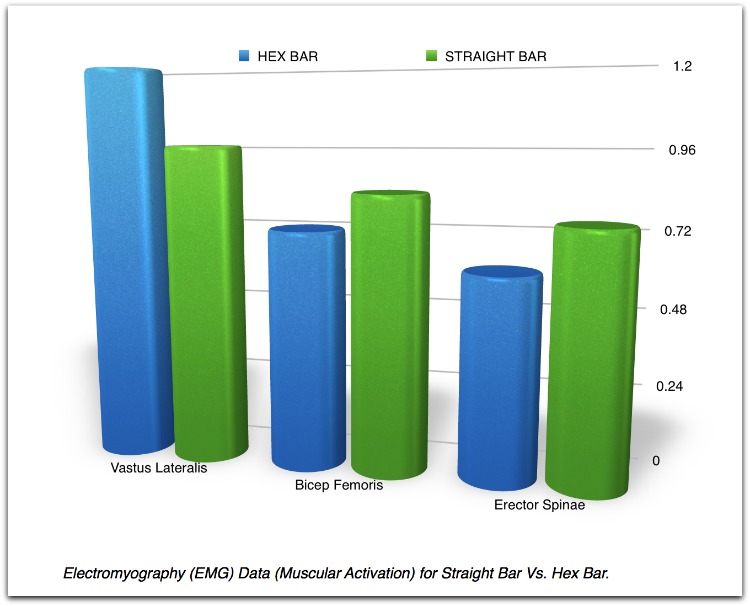 What this study demonstrated was that the hex bar produced more quad dominant movement while the straight bar deadlift seems to use more hamstrings and lower back muscular activation.

What was a little surprising was that there was no difference in the 1 RM values.

This is in contrast to a previous study which demonstrated a nearly 20 kg increase with the hex bar deadlifts.

The difference in that study may be attributed to the participants of the previous study in which that study use participants who were competitive powerlifters, who are more skilled and experienced lifters. This could potentially explain why they produce more strength with the hex bar as a unique variation.

What this means is that the demand for the hip and lumbar spine seems to be greater with a straight bar in comparison to a hex bar.

Visually and biomechanically, this makes sense in comparing the two styles.

And, finally, the design of the hex bar does seem to allow higher force, power, and velocity in comparison to the straight bar.

This is because the design of the hex bar allows the user to set up a more advantageous position in the starting phase and throughout the movement to allow these improvements in force characteristics.

This design allows the load to be maintained closer to the lifter’s center of gravity and may help to explain the benefits of greater force, power, and velocity.

The straight bar, on the other hand, is positioned more anteriorly relative to the body.

As mentioned this is a very interesting study, and it’s great to see the EMG analysis as well as force characteristics measured comparing the two barbell deadlift variations.

The hex bar deadlift is a unique style of deadlift and may help to evenly distribute the load throughout the joints of the lower body and also help to reduce the stress on the lumbar spine.

The hex bar deadlift is a quad dominant movement as compared to the straight bar conventional deadlift, which is more hip dominant and also requires greater demand on the lumbar spine.

From a muscle training standpoint, if the goal is to strengthen the lumbar spine and hamstrings, straight bar deadlifts seem to be a better choice while the hex bar may be a more effective method for quad development and also for maximizing force, power, and velocity during the deadlift.

Another consideration is that the straight bar is, obviously, the bar used in competitive powerlifting.

If you’re a powerlifter, then the straight bar is the “bar of choice.”

They are similar, yet they are different.

There is certainly a role for both styles. The conventional deadlift, in my opinion, would be the more demanding, challenging, and technical of the 2 styles.

For most people, the hex bar is the “easier” variation.

Both have unique benefits and attributes for the athlete and the recreational exerciser.

As with any exercise or programming approach, it’s important to understand the differences and benefits while keeping the primary goal at the forefront of training. That’s the bottom line.

Which is better, straight bar or hex bar deadlift?

The answer is it depends on what you’re trying to achieve, experience level, available equipment and more.

My preference? Well, it’s the straight bar, without a doubt.

I prefer the technical demand and challenge, not to mention that it’s more specific to my training goals.

Experimentation is the key to discovering what’s best for you.

Want to reinforce your learning? You can hear me talk about this study for a better understanding. Check out the Scientific Strength Podcast in iTunes.

Scott Iardella, MPT, CSCS writes about strength training methods to optimize health and performance. If you enjoyed this, join a strong and growing community of passionate fitness enthusiasts and subscribe below to get a ton of cool, free stuff! Subscribe at RdellaTraining.com/join and get your FREE Report and Resource Guide.
Tweet
Share49
Pin
49 Shares