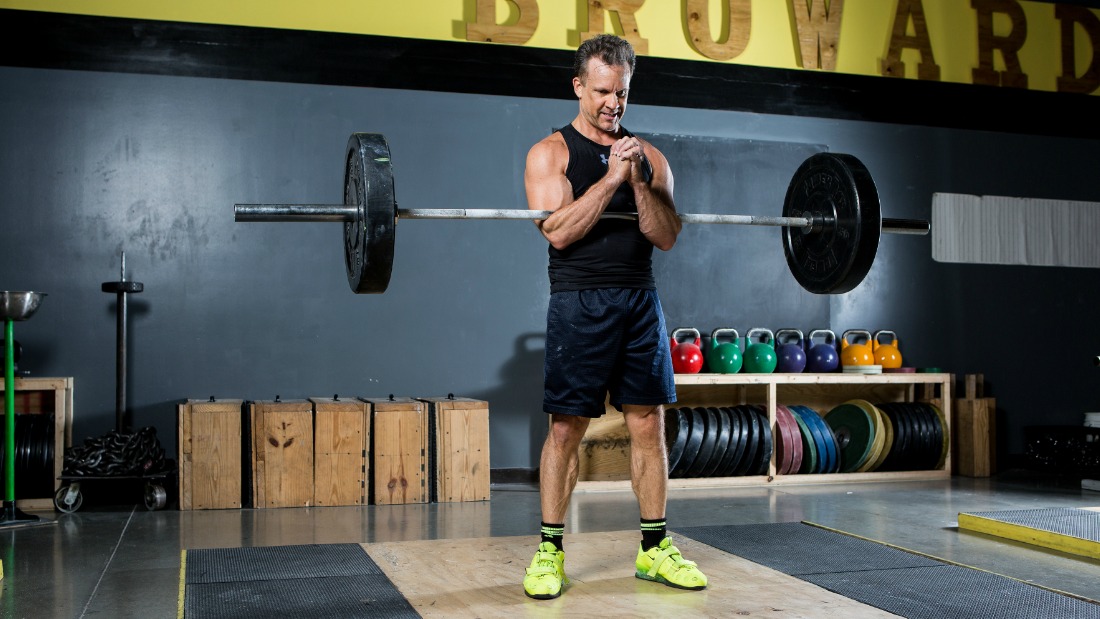 The barbell zercher squat has to be the best squat that most people never do.

I’ve never gone into a gym or training facility and observed someone performing a zercher.

And, rarely do a I hear about someone incorporating zerchers into their program, yet it’s such an effective and valuable squat variation that makes it almost impossible to squat improperly.

WHAT IS THE ZERCHER?

The zercher squat is named after Ed Zercher, a strongman and power lifter from the 1930’s.

The story is that his home gym had an assortment of heavy objects in which he did experiments in squatting.

These experiments ultimately led to this unique squat.

The squat variation is done with the barbell in the front of the body, but unlike the front squat, the bar is positioned lower and held in the folds of the elbows (as pictured above).

Here’s the major benefit of the zercher squat.

What does that mean?

It teaches you exactly how to squat.

It teaches you to push your knees out with an upright posture while driving your hips back.

HOW TO DO THE ZERCHER

1)  To begin the movement, ideally you will want to be in squat rack with the bar positioned slightly below the elbow joints. When approaching the bar, you will place the bar in the crook of the elbows, so you’ll want to be at a height where you have to squat slightly to get in the position, then stand to remove the bar from the rack taking a step backward.

2)  The elbows should be comfortably positioned below the shoulders and about shoulder width apart.

3)  I prefer to clasp the hands together (as shown) to securely position the bar in the arms and create stability. Keep the hands up.

4)  The foot position is the same as a standard squat with the feet slightly wider than the shoulders and the feet turned out just slightly (approximately 10 degrees or so).

5)  When you descend, you should “feel” like you are being pulled into the hole (the bottom position of the squat). You will squat to the bottom, which is when the elbows graze the inside of the thigh. Simply sit back into the squat and the zercher will keep you well positioned in an upright posture.

6)  Keep the arms close to the body, although the elbows will drift forward slightly during the descent.

7)  From the bottom, drive up through the heels keeping an upright posture without forward lean. Push the knees apart to prevent a valgus knee collapse (valgus = knees in position).

8)  Keep tight, keep stable, and “stay tall” during the entire movement. Again, the zercher will “self correct” in teaching you how to do this.

HOW TO USE THE ZERCHER

My experience with the zercher is that it’s extremely effective in teaching people new to squatting how to squat properly.

Not only does it teach great squat mechanics with an upright torso, it helps people learn the proper hip and knee action.

The major hidden benefit of the zercher is the ab contraction.

The major hidden benefit of the zercher is the ab contraction.

Because of the position of the barbell anteriorly on the torso, the abdominal contraction required to stabilize is very high.

The zercher is a great developer of the abs and is effectively working the anterior chain, as well as the posterior chain.

I like to use the zercher on “de-load” training cycles or as an assistance exercise during certain programs depending on what the primary training goal is at the time.

Almost no matter how I use it, I’ll perform the zercher as follows:

FINAL THOUGHTS ON THE ZERCHER

The zercher seems to help a lot of other things related to strength, movement, and function.

It’s been said that it helps build a stronger deadlift and has carryover to other lifting related and functional tasks.

One of the unique challenges is the pressure on the forearms.

While it doesn’t demand the upper body mobility or flexibility of other squats, it does apply some direct pressure to the forearms.

Remember, the bar is resting in the crook of the elbows, so there will be some “uncomfortableness” with this as you get used to it.

You will get used to it, if you perform the exercise consistently.

I would not use a towel between your forearms and the bar as this makes the bar more unstable.

A better alternative would be a long sleeved shirt or sweatshirt.

Otherwise, you will adapt to the bar position on your arms over time.

One last thing about the zercher.

It eliminates high compressive force on the spine (compared to the back squat) due to the position of the barbell relative to the body, so it’s great for periods of “de-loading” from heavy squat programs to de-load the spine.

Again, the zercher squat is the best squat that most people never do.

Very effective, self correcting, and fits into many different program approaches.

Scott Iardella, MPT, CSCS writes about training methods to optimize health and performance. If you enjoyed this article, join a strong and growing community of passionate fitness enthusiasts and subscribe below to get a ton of cool, free stuff! Subscribe below or go to RdellaTraining.com/join to get FREE training resources right now.
Tweet
Share104
Pin
104 Shares