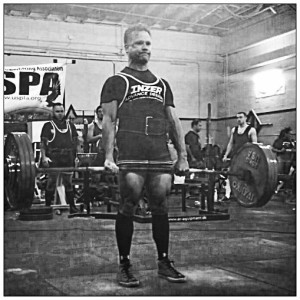 All week I was relaxed.

No anxiety at all, considering I was entering my 1st Powerlifting meet this weekend.

I had a great week and many months of training leading up to this meet.

But, Saturday morning, the day of the meet, was a different story.

Yeah, I definitely had the “nerves” starting to kick in Saturday.

I had even planned to do some writing in the morning before leaving for the meet, but I couldn’t get my groove.

Instead, I did something I rarely do.

What was on was amazing.

I ended up watching the NFL Network and this series about the Championship San Francisco Forty-Niners dynasty with Joe Montana, Jerry Rice, and the great Coach, Bill Walsh.

It was perfect to watch this and listen to their passion, dedication, and focus.

It really got me fired up and put me in a great frame of mind.

As I listened to their stories, it really hit me about the mindset of those athletes.

After all, a big part of our training and performance success correlates to our mindset, our “inner game.”

There’s an old tale about 2 wolves, not sure if you’ve heard it before.

I had just read about this in a great new book (more about that soon).

There’s the good wolf and the bad wolf, which are inside each of us.

The good wolf is positive and beneficial.

The bad bad wolf is negative and destructive.

And, there’s this battle between them, but the wolf that wins is the wolf we feed.

In other words, we need to make sure that we feed the empowering thoughts, not the destructive ones.

In the mindset of an athlete, it would look like this.

The good wolf is the self confidence, the inner strength, discipline, drive, and all the positive thoughts we think and feel.

The bad wolf is the self doubt, the fear, negativity, self destruction, and all the other negative self talk.

The question is, which wolf will you feed?

I kept thinking about that concept during the day of the meet.

But, it was my 1st meet and the anxiety was high, I’ll be honest.

My heart was pumping and the adrenaline was cranking (which can work for you or against you, by the way).

Why was I worked up, it’s not like I was competing the for the gold or anything?

I was competing for “my personal gold.”

I wanted to bring my best and there were specific numbers I  wanted to hit at the meet.

What matters most is giving my best and making continuous progress, period.

To go to the meet and not bring my best would be a huge disappointment to me.

I wouldn’t say it would be a failure, as there’s always something we can learn from adversity.

It’s all part of the process.

When we fail, we learn what we need to do to improve.

We learn what we can do better.

Anyway, when I got to the meet I felt great.

It was energizing to walk into the gym and see the competition already underway.

I was relaxed again for a while and it was helpful to see how the judges were judging the meet.

As the time ticked by and it was closer to my time to compete, the anxiety started to elevate again.

Thankfully my friend Brian and his great team of lifters were there to make things ‘less stressful.’

Here’s how things started to unfold.

The order of the lifts in the meet is squat first, then bench, then deadlift.

In case you aren’t familiar with a powerlifting meet, you have 3 attempts of each lift.

You begin with your “opener” (which is your opening weight) and progress up from there.

I began my warm-ups, which are only a handful of mobility exercises.

It seemed like forever until the 1st attempt of the squat, but this was clearly when my adrenaline peaked.

It’s the 1st time I had walked out into the center of a gym and squatted a “reasonably heavy” weight in front of an audience.

It’s a different feeling than what I had experienced when I stepped on stage as a competitive bodybuilder many years ago.

It was similar, but different.

As my 1st squat attempt came closer, I heard…

“Scott…on deck” meaning you’re up next.

What a rush, as that means it’s time to perform.

Basically, I really started to get into a zone at that point.

It was kind of trance-like, as I really focused on the lift in front of me.

“One lift at a time” was my inner dialogue.

And, I didn’t feed the bad wolf.

Instead, I fed my confidence which told me I had made these lifts before.

At a bodyweight of 164 at weigh-in, here were the numbers (in pounds) for the squat.

While I did make a new PR (personal record), I knew I should have squatted more and had even anticipated a higher number for the 3rd attempt.

Nonetheless, it was a PR.

And, all lifts were “white lights,” meaning I made all the lifts successfully. (Red light is a “no lift.)

I was happy going 3 for 3 in attempts for the squat.

Next up was the bench press.

I have to admit, I had put most of my efforts into the deadlift and squat in my pre-competition training cycles.

As a matter of fact, it was only last year that I started to bench press consistently again.

I was shooting for 245 in the bench, which is what I had been hitting in my training preparations.

I would have been totally happy with that.

My results were 1 out of 3 lift attempts in the bench press.

I had become “rattled” from the ‘red light’ in attempt 2.

Extremely disappointing and I was thinking how could I possibly recover from this?

There was only one way.

I had to hit a new PR in the final lift, the deadlift (the good wolf).

But, I was getting tired and mentally fatigued from such a long day (the bad wolf).

Not only did I need the physical energy, but going back to the mindset thing, every competitor had to dig deep.

I think we started deadlifting somewhere around 7 pm, which was much later than I had anticipated even being at the meet.

No question, I was tired.

I even wondered how I would make my “usual” numbers, let alone a new PR (the bad wolf again).

Here’s how it went down.

I went into the zone, this was my lift, the lift I put so much effort into and the lift I loved.

My friend Brian was right there fueling my confidence to finish the night strong.

I walked up to the bar, got in my stance, took my breath, wedged myself between the ground and the bar, and pulled.

The opener was an easy 350, as it went up smooth and efficient.

No problem, it went up without a hitch and I felt strong again.

The good wolf was feeding.

Then came the moment of decision when I was standing at the judges table after attempt 2.

I told him my numbers for the 3rd and final attempt.

Now, this meet came down to one lift, the final attempt of the deadlift.

This was seriously the difference between a successful meet and a massive disappointment.

One of my big strength goals was to achieve a 400+ deadlift this year (nearly 2.5x BW), so it came down to one rep for success.

I approached the bar, got in my stance, gripped the bar hard, felt my wedge, and I pulled explosively (as I remembered Dr. Fred Hatfield had told me in our podcast interview).

As the bar came off the ground, I knew I had the lift.

The sticking point for me has been getting the bar moving from the ground (starting strength), so once it was moving, I knew I had it.

I put the bar down and looked over to see 3 white lights.

I finally broke through the barrier of 400 pounds.

The meet was a success.

With 2 new PR’s in the lifts I cared the most about, I was happy.

It was a battle, it was an experience, and it was just another step forward in the journey.

Listen, I have higher goals and standards to move towards, for sure.

But, for me, on this day, it was victory.

It was forward progress, which is what it’s all about.

So, this good wolf, bad wolf concept has truth to it.

It’s about the importance of our mindset, our inner game.

Certainly, we MUST have technical proficiency and high levels of strength to excel, but mindset is such a critical piece.

And, the wolf we feed contributes to our performance and our results.

This applies in competition, but it also applies in every training session we have, as well.

We’ve GOT to feed the good wolf.

Scott Iardella writes about proven strength training methods to optimize health and performance. If you enjoyed this article, join the community by subscribing below.