10 Aug The Most Important Muscle For Athleticism And Performance

What muscle do you think is critical for performance in kettlebell training, powerlifting, Olympic weightlifting, bodybuilding, or to achieve ultimate athleticism in any sport?

It should be pretty obvious that would be the gluteus maximus.

If you fail to tap into the power of this muscle, you’ll greatly limit your training performance and results.

We really can’t emphasize the importance of the glutes enough in performance training and for developing the ultimate athletic body.

It’s a hallmark feature of a well conditioned athlete.

While the gluteus maximus is the “big player” of the gluteal muscle group, there are other important muscles there, as well.

The “glutes” consist of the gluteus maximus, medius, and minimus.

But, the gluteus maximus (GM) is the largest muscle in the human body and it’s also the strongest.

The GM is a one joint muscle and originates from the sacrum and a small portion of the pelvis (the ilium).

The muscle inserts into the ileotibial band, while the more inferior fibers insert into the greater tuberosity of the femur (the upper leg bone).

This muscle is a powerful hip extensor, while it also contributes to hip abduction and lateral (or external) rotation.

But, hip extension is the most significant function of the GM, which brings us to the function in various sports and functional activities.

The GM is highly active in all of these kettlebell fundamentals:

There’s a term called, gluteal amnesia, which is where people forget how to properly activate their glutes.

Strong glutes are a major part of full body strength with all the big lifts.

If you don’t have powerful glutes with the Olympic lifts, you won’t be very successful as the hip extension explosiveness is so essential in the 1st and 2nd pulls.

In addition to functional and sports performance, let’s face it, developing a strong set of glutes does a hell of a lot for aesthetics.

KEY EXERCISES FOR THE GM

According to EMG specialist and glute expert, Bret Contreras, there is nothing as significant to maximally activate the glutes like the barbell hip thrust.

Here’s a short video below demonstrating good technique with the barbell hip thrust.

Basically, the barbell hip thrust (according to EMG data) is the king of glute activation.

Here are the numbers for some of the most highly active exercises, as revealed by EMG analysis:

And, it should be mentioned that the kettlebell swing is highly active, as well.

In speaking with Bret about this, he mentioned he has done some EMG work, which demonstrated a very high activation of the GM during the swing, although I have not seen his numbers (and they were not contained in his book).

Pavel Tsatsouline reported an 80% MVC (max voluntary contraction) was measured in the lab when he performed a two-handed kettlebell swing using a 32kg kettlebell.

And, when this was done as a one-hand swing, the MVC was 100%, so the kettlebell swing, whether performed with one hand or two hands is highly effective for recruiting the firing of the GM.

The bottom line is that the gluteus maximus is very important in all functional activities, sports, strength and performance training, and for body aesthetics.

If we fail to maximize the progression and development of our hip strength and power, we’re missing out big time.

I put together a very effective, simple pre-workout session to “program” the hip extension movement and activate the firing of our glutes.

This works because it gets us to “feel” what it’s like to activate our glutes prior to a training session and hopefully carryover to the session.

And, it should make the glute activation become “automatic” and conditioned when we train, so we don’t have to think about it.

What I mean is that when we perform a kettlebell swing, for example, at the finish of the swing the glutes should be maximally or near maximally contracted (Pavel’s number’s above).

Surprisingly, this doesn’t always occur as people tend to lose the glute contraction at the top.

To prevent this, here’s the program.

Let’s call it the “glute activation session” because that’s the goal of this simple pre-workout session. 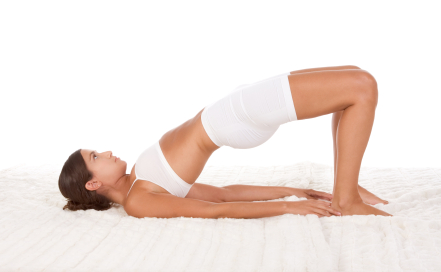 As I mentioned, I’m a big fan of the glute bridge exercise (pictured above) because I’ve had so much personal success with it.

When I had a major injury to my low back many years ago, it was the consistency of performing this exercise that I attribute to my rehab from the injury.

And, for activating the glutes, it’s a fantastic drill.

I’ve found that all 3 of exercises are very effective in teaching and learning how to “program” the gluteus maximus.

If you’re struggling with activating the glutes or simply want to make sure you’re firing the GM appropriately, try this simple session.

We need strong, powerful glute activation in everything we do related to sport and performance.

We’ll feel stronger and more powerful, we’ll perform better, and even look better by tapping into our hip power.

Scott Iardella writes about strength training methods to optimize health and performance. If you enjoyed this article, join a strong and growing community of passionate fitness enthusiasts and subscribe below to get a ton of cool, free stuff!
Subscribe below now or go to RdellaTraining.com/join to get your FREE Report, Kettlebell Impact with 12 Powerful Kettlebell Workouts.
Tweet
Share112
Pin1
113 Shares