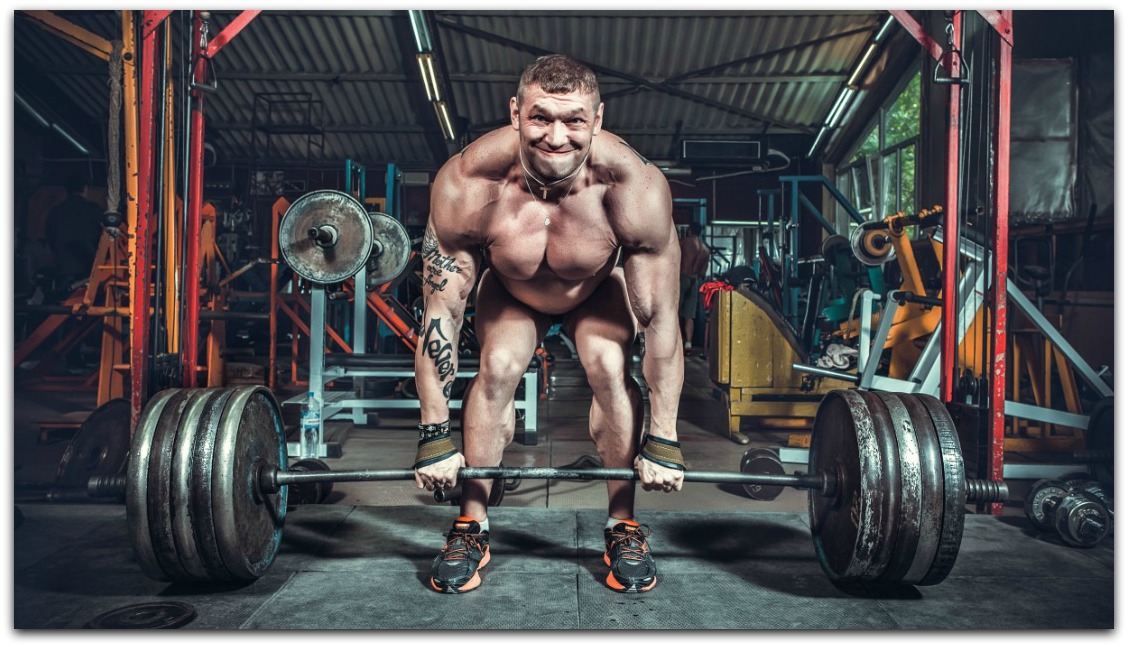 13 Mar Warning! What You Need To Know About The Rounded Back Deadlift

Is it just me or does the the rounded back deadlift seem to be getting a lot attention these days? Does this technique have any unique advantages or is this a disaster waiting to happen?

In this article I’ll share my perspective on the rounded back deadlift and I think there are 2 scenarios here (I’ll discuss them in a minute) with the technique, so make sure to read this through if you’re infestered in the health of your back.

Spine biomechanics is something I’m extremely passionate since I had such a crushing injury to my low back many years ago. While my back is in wonderful health today, it’s a topic and an area of training that I will always have extreme commit to because of my unique situation and all that I had to go through to get back to the level I train at today.

First, let me say this. I love deadlifting and think it’s one of the most valuable exercises for all of us. However, there are considerations. There are always considerations. With proper coaching, most people can learn how to deadlift properly, but qualified coaching isn’t always available is it?

This leads me to the point I just mentioned about the 2 scenarios with the rounded back deadlift. 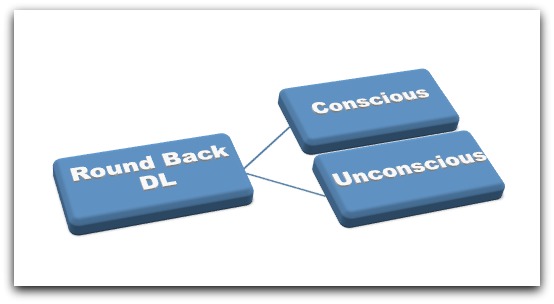 So, the rounded back deadlift becomes either a conscious technique or an unconscious consequence of poor technique, bad biomechanics and faulty position, and poor motor control.

In the most simple terms, spinal flexion is the forward bending of the spine.

Spinal extension, on the other hand, is backward bending or what’s known as an arched back in lifting terms.

NEUTRAL SPINE = the “sweet spot” between flexion and extension that allows for the optimal position for each spinal segment. This is the natural position of the spine.

Here’s what I can tell you.

In my book, The Edge of Strength, I discuss in-depth one of the major life-changing events in my entire life – an absolutely debilitating low back injury I experienced many years ago (specifically, a severe disc extrusion of the lumbar spine at the level of L4-5).

Why did this happen – what was the specific mechanism of injury?

The center of the disc is the jelly (the nucleus pulposus) and the outer area area is the dough (the anulus fibrosis).

When the spine is flexed under load, the donut (disc) is compressed and the jelly is displaced backwards (posteriorly) and with poor biomechanics and improper motor control – it can lead to disc bulges, herniations, and more severe disc or spine injury and dysfunction.

No one will ever be able to convince me that picking up heavy loads in a flexed position is safe and I certainly avoid it as much as I can during my own training sessions.

But does that mean that it’s bad for everyone?

Let’s shift our attention now and look at the video below of an elite powerlifter who uses the rounded back deadlift as his preferred technique and leverage advantage to pull massive weights.

You’ll hear more about Konstantin in just a minute, but check out this video first.

What do you really notice going on here though?

Is his lumbar spine rounded and flexed?

Or is the flexion coming from the upper back? If you look closely, you’ll see that the flexion is primarily occurring in the upper back and the lumbar spine appears to be almost flat. It’s a unique technique that works well for him, but that doesn’t mean it’s right for you.

In a recent candid conversation with world-renowned Spine Biomechanics Professor, Author, and Expert, Dr. Stuart McGill of BackFitPro.com, I asked him this question.

WHAT ARE YOUR THOUGHTS ON THE ROUNDED BACK DEADLIFT?

There’s a lot of discussion about this on the Internet and you know what I’m going to say. The answer is that it really depends on the person.

People will bring up the example of Konstantinovs, the great powerlifter from Latvia who does what’s called “the dive.” He flexes very ballistically down and pulls the bar up with what appears to be a fully flexed spine.

It’s worked for him. As far as I know, he’s had no back issues. I’m not sure on that, but he’s a very special athlete and the problem is that athletes are different. They have little peculiarities that allow them to do exceptional things.

So, the public should not look at an athlete like that and say that it’s ideal for everybody. It works for a very, very special individual. So, no I would never suggest doing that with the public and we’ve already discussed what is safest in terms of injury and performance mechanics principles.

But, again on the internet there will be some young, ambitious trainers and coaches and they’ll say:

“McGill doesn’t know what he’s talking about, he’s being far too conservative and emphasizing form too much – go ahead round your back, it will be alright. I’ve done it and I’m fine.”

Well, I can think of several of those people over the years who have called me up and said, “Dr. McGill, you were right. I’ve blown up my back. Can I see you as a patient?”

And, of course, I can’t say anything to them like – “Well, hold on. Weren’t you the guy who was trashing me publicly a few years ago?” I wouldn’t say that to them, but I do go to bed at night and just think – you get old too soon and smart too late.

(*Joint centration = the optimal position where there’s an ideal balance of muscle tension acting on a joint.)

Here’s what I mean. Watch people do the rounded back deadlift and you will see that as the bar passes over their thighs, all of the sudden their whole body starts vacillating.

That’s their system trying to shut them down saying – STOP!

Personally, I think you’re going to have much better success at picking up heavy weights if you learn how to stabilize and create rigidity. And if you do that, it’s going to create a better life for you with being able to have – and maintain – those positions through your daily activities.

A CASE AGAINST THE ROUNDED BACK DEADLIFT

While the rounded back deadlift may be used by some elite powerlifters, it’s certainly not a technique that I would ever advocate or recommend for the vast majority of people.

There are too many risks that clearly outweigh the benefits.

I think that the majority of people would not consciously choose to do this technique, however, a troubling concern is the unconscious application of the rounded back deadlift (this is when the load increases and improper spinal stabilization occurs and defaults to the rounded back).

When the spine is under load, a neutral spine position is the best way to avoid injury and maintain the highest level of integrity on the intervertebral disc (avoiding disc injury).

On the opposite end of the spectrum , it’s when the spine is repeatedly flexed and extended under load that presents the greatest opportunity for injury. Now combine this with lateral flexion (side bending) and rotation (twisting) and this is a recipe for disaster.

A flexed spine tends to do the following (according to the work by Dr. McGill):

All of these are undesirable and will potentially be a major contributor to low back disorders.

Why would anyone (other that a small number of elite level lifters) choose the rounded back deadlift knowing that there are significant problems associated with the technique?

Well, I don’t think there are many of you reading this that would consciously choose to perform it. I may be wrong but I don’t think so.

The real problem is the lack of self-awareness (unconscious application) when the load gets heavy and technique defaults to a rounded back.

This is a problem and a consequence of heavy loading, but proper technique is always going to be paramount. I don’t think any of us are interested in having jacked up spines or dealing with an injury of any kind.

Poor technique is a weak link in training.

The key to a good, strong deadlift (or any major lift) is proper technique and one of the essential components to good technique is proximal stiffness, as discussed by Dr. McGill.

Proximal stiffness is maintaining a rigid torso in a neutral spine position during the big lifts.

This is done through motor learning and effectively learning how to stabilize the spine, even under heavy loads.

This point alone could be the topic of discussion for a new article, but an effective way to develop proximal stiffness and train the core musculature to fire and create this rigidity can be done with kettlebell carries, which are relatively simple and self-corrective.

Specifically, the bottom’s up kettlebell carry (a Dr. Stuart McGill favorite) requires a high level of proximal stiffness to maintain the kettlebell in the inverted position. The deep abdominal wall muscles (external obliques, internal obliques, and transverse abdominis) all are highly active here and greatly contribute to keeping the kettbell in the bottom’s up position. This makes for strong core musculature and appropriate trunk stability.

It all comes back to optimizing biomechanics (neutral spine) and motor control (proximal stiffness) for exercises like the deadlift – if the goals are maximal performance and minimal risk for injury.

The rounded back deadlift?

Let’s put this topic to bed.

It’s just not a reasonable or suitable choice for the majority of us – end of story.

And, for those who unconsciously default to this movement pattern, more work must be emphasized on the proper biomechanics and motor control in the deadlift.

The New book – The Edge of Strength – is now available in Amazon. An Unconventional Guide containing 27 Chapters and a complete system for long term training success. It’s now available as a KINDLE edition or PAPERBACK! To get a FREE sample chapter of the New Book – The Edge of Strength – go to RdellaTraining.com/edgebook. You’ll be able to download the Table of Contents, Introduction, and Chapter One.

Scott Iardella, MPT, CSCS writes about strength training methods to optimize health and performance. If you enjoyed this, join a strong and growing community of passionate fitness enthusiasts and subscribe below to get a ton of cool, free stuff! Subscribe at RdellaTraining.com/join and get your FREE Report and Resource Guide.
Tweet
Share65
Pin
65 Shares