13 May What A New Study Says About Kettebells vs. Barbells 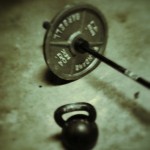 This study looks at the training effects of kettlebell training compared to weightlifting on the vertical jump, strength, and body composition.

Let’s take a look as the study specifics and I’ll break down what it all means.

The background was to look at weight lifting exercises, including some olympic lifts (high pulls, power cleans, and back squats) to improve vertical jumping performance.

These type of power barbell lifts have been shown to mimic the power of explosive vertical jumps and has been studied previously in published data.

However, kettlebell training studies are limited, due to this training method still being considered a “relatively new” form of athletic conditioning.

The study suggests that kettlebell training may be a supplemental way to improve strength and power if barbells are not available or appropriate for athletes for various reasons.

The purpose of this study was to access if kettlebells could serve as an alternative method to heavy resistance training with barbells over a 6 week time period for strength, power, and body composition.

The study aimed to make direct comparisons of traditional barbell lifts versus kettlebells and suggests that practitioners will be able to compare the effectiveness of these 2 training modalities.

There were 30 healthy men (age 19-26) with a minimum of one year of resistance training experience that were selected for this study.

It was noted that none of the subjects had extensive weight lifting or kettlebell training experience, so they were learning proper technique and form during this study.

They did receive a one week orientation period to “familiarize” themselves with the exercises until proper technique was achieved.

Subjects were randomly assigned to one of two groups, the weight lifting group or the kettlebell training group.

Here’s what the kettlebell group’s training program consisted of:

In comparison, the barbell group’s training program was as follows:

What this study found…

The study found that the short term training effect (6 weeks) from kettlebells was equivalent to barbell training for the improvement in vertical jumping, one of the performance measures in the study.

Both barbell and kettlebell training increased strength in the back squat, although there was a slight favor with barbell training which had an improved strengthening effect.  It should be noted, the barbell group trained with heavier loads, so this is not surprising at all.

It’s important to remember that strength is gained by using heavier loads, which was done in the barbell training group.  The kettllebell group used only a 16 kg kettlbell for all exercises.

This is very important point and a limitation to the study in that this is not an “apples to apples” comparison in terms of strength.

It is similar in that the kettlebell swing requires explosive hip drive and power, so this seems to be a reasonable explanation.

Body composition measurements did not change significantly with either form of training.  Again, this is no surprise since there were no dietary changes, the training was done only twice per week for 6 weeks, and the volume was not extensive.

The key limitation, as mentioned, was the 16 kg kettlebell.

Clearly, the barbell group trained with increased load, therefore had improved strength adaptations in the back squat.

Even with the limitation of using a “moderate” to “light” kettlebell for the exercises in this study, the findings still had quite a benefit supporting the training effects kettlebells.

As a matter of fact, the study concluded that the use of kettlebells is an effective alternative form of training for strength and conditioning coaches to improve strength and power in their athletes.

As I always say, the key is learning the correct technique to maximize results.

This a very encouraging study for people that train with kettlebells or those that want to. Obviously, it’s also a great study for strength coaches and athletes.

Kettlebells and barbells are both very powerful training tools and effective methods.  It’s not surprising that this study demonstrates that.

Additionally, there is another clinical study looking at the effectiveness of kettlebells in this same journal.

As always, if this was helpful, please share it!