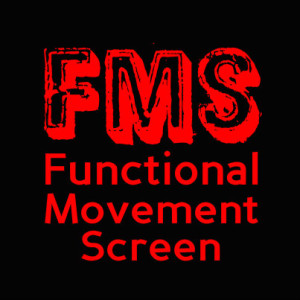 Let me tell you why the FMS™ (Functional Movement Screen) makes a lot of sense and can potentially help reduce the risk of injury for athletes, strength enthusiasts, and recreational exercisers.

The FMS was developed by Gray Cook and Lee Burton to determine whether there is a baseline of quality movement.  The screen consists of 7 movements that are intended to quickly and easily identify asymmetries and/or alterations in human movement patterns.

The 7 movements are an assessment of qualities in mobility and stability to determine poor movement patterns or asymmetries that could be factors in risk for injury (even despite an apparent high level of athletic or physical performance).

The maximum score you can achieve with the FMS is a 21, but scores below a certain threshold (<14) can correlate with the increased incidence for injury.

The FMS does not prevent injury, but it can be thought of as a ‘red flag’ indicator to further address certain deficits or dysfunctional movement patterns.

It’s easy to do and can be very revealing.

Think of it this way, it’s the foundation of quality movement (or mobility/stability) and without a strong foundation, there’s potential for injury.

Is this the only thing we should look at?

Nope, of course not.

There are definitely other key factors, performance indicators, and tests for consideration, however the FMS a big piece of the optimal fitness equation.

And, there’s also strong data to support the FMS and the correlation to injury.

For example, there was some amazing data published looking at the FMS to determine the injury risk in female college athletes (Use of a Functional Movement Screening Tool to Determine Injury Risk in Female College Athletes, North American Journal of Sports Physical Therapy, Vol 5, No 2, June 2010, Chorba et al).

In this study, 38 NCAA female college athletes were screened with the FMS before the start of their athletic seasons (basketball, volleyball, or soccer).

What the study found was that the female athletes that had a score of 14 or less had a significant increased incidence of injury.  A whopping 69% of the athletes that scored 14 or less sustained an injury, so the lower scores strongly correlated to injury.

While the study has a limited sample size (38 athletes), the findings are still powerful and align with other previous trials (the Keisel study with 46 Football players and the Peate Study with 433 Firefighters, as examples).

The Chorba trial showed a 4-fold increase in injury risk and other studies have shown even higher rates of risk for injury.

As with previous studies, the FMS was able to predict injury.

The potential rationale for injuries in the athletes that scored lower (<14) was partly due to compensatory movement patterns that can be masked in athletics (or function) until these compensations or asymmetries are eventually broken down and revealed in an injury.

In other words, repetitive microtrauma by inefficient movement until an eventual musculoskeletal injury occurs.

Now, what do you do when a lower score is found with the FMS?

Once the problem area is identified with the screen, it’s relatively easy for the skilled coach or trainer to build in a corrective exercise strategy.  It becomes a part of the program and the FMS deficient area must then be re-assessed to determine if the corrective exercise strategy is improving or not.  If not, there are many other exercise options to try until the right corrective is found to be effective and improve the score to an acceptable level.

It’s a sequential, progressive approach that must be monitored and re-assessed for progress, which is fast and easy to do for both the coach and athlete.

The FMS offers major benefits and is a valuable, useful tool to minimize our risk for injury with training and athletics.

It’s important to understand that the FMS does not guarantee injuries won’t occur.

You can still score a 21 and have an injury occur, so there’s no guarantee you won’t get hurt.

Instead, it’s best served as a ‘red flag’ indicator for potential risk.

So, what should you do now?

You can locate an FMS certified instructor at FunctionalMovement.com.

No matter where you are in your training, it would be beneficial to make sure your score is acceptable and not a ‘red flag’ for injury.

As Gray Cook (the architect of the FMS) states, “You can’t put fitness on dysfunction.”

Again, if there’s a stability or mobility issue in our foundation of fundamental human movement, we need to attempt to correct it before a serious problem is revealed.

That’s why the FMS makes sense, but remember it’s just one piece of the puzzle.

Scott Iardella, MPT, CSCS writes about strength training methods to optimize health and performance. If you enjoyed this, join a strong and growing community of passionate fitness enthusiasts and subscribe below to get a ton of cool, free stuff! Subscribe at RdellaTraining.com/join and get your FREE Report and Resource Guide.
Tweet
Share28
Pin
28 Shares