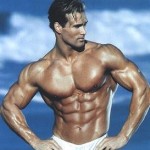 Most people always include abdominal exercises in their routines, right? So why is it that most people never get the “gold standard” for health and fitness: the 6 pack abs?

If you’ve been religiously doing your abdominal exercises and your abs are NOT showing to your satisfaction, why do you think this is?  Your abdominal muscles are actually one of the easiest muscles to build, yet most people have major difficulty in developing their 6 pack abs.

Let’s look at the truth here about getting a 6 pack. If you are working out your abs regularly, you probably already own that much sought after six pack. Yes, you do. The only trouble is that your belly fat is covering them up!  Your abs will not show up well if you have a body fat perentage of more than 11% for men and 17% for women. So, the truth is this, the more body fat you burn off, the more defined your abs will be, period. You will start down the path to the rippling washboard abs when your body fat is around 11% or less for men and around 17% or less for women (both are considered lean).

So, if you have fat on your belly, cut back the abdominal exercises and focus on burning off the belly fat first. And remember, there’s no such thing as “spot reducing”.  You must lose body fat in your entire body, not just your belly. This is an important concept to understand.  Losing fat is systemic, not local.  You can’t just remove fat from one area (unless you get a lipo, of course).

There’s another set of people that have put in so much effort to develop their abdominal muscles and yet their abs are not showing, although they do have low body fat. Again, there is a simple explanation. They are doing the wrong exercises and working out with bad form.

Let’s take for example the most common abs exercises, the sit up and the leg raises. Everybody seems to be doing these two exercises not knowing that these exercises really don’t do much for their abs. Now why is that? That is because your hip muscles, specifically, your hip flexors are firing during both of the those movements. Those muscles are actually doing a good bit of the work. Since your hip flexors are doing most of the work, there are other, better exercises that work your abdominals and core muscles much more effectively.  Additionally, sit ups place too much pressure on your lower back, as you come up to the “up” position. This is not a good thing, especially if you already have back issues.  My opinion is that sit ups are really a poor exercise for the abdominals.

So you’re thinking, I’ll do crunches instead. Another surprise is that most people perform their crunches wrong. Think about it. Why is the exercise called the “crunch”? It’s because you must squeeze your abs so that you are crunching them. In order to squeeze your abs hard, you have to “curl up” and breath out all the air in your lungs at the top position and then squeeze the muscles so hard that you feel a burn. That will take a few seconds to crunch out all the air before you lower to the beginning position again.

You can’t really do this effectively if you just go up, down, up down, up down rhythmically (this is bad form), like we see so many people perform. So, if you have been doing hundreds of crunches everyday with minimal result, now you know a possible reason why. In fact, it is almost impossible for the average person to do endless reps of properly performed crunches. Form and proper execution is key.  But, how “functional” is a crunch?

I would argue a better exercise is “the plank” as an exceptional example of a core stabilization exercise that works your abs in a functional position.  You use your abs more in a stabilization position than a crunch, right? This exercise really strengthens your entire trunk musculature and makes your core muscles very strong and stable.  A great start to getting that six pack.

Now that you know some of the reasons WHY your abs are not showing up well. The key is to burn body fat (through proper nutrition and exercise training), perform the right exercises, and perform them in correct form. It is then that you  will see your 6 pack abs in due time.  Apply these principles and you’ll see the ripples start coming.

We all want a nice 6 pack abs.  Like I mentioned, it’s the “gold standard” of health and fitness.  Reduce your body fat and you’ve got them.  It’s as simple as that!

Here’s another idea that may shock you:  kettlebells.  If you know me, you know I had to mention kettlebells as a solution for the 6 pack!  LOL